[tweetmeme source=”cbyndas” only_single=false]As we slide into the holiday weekend, I am struck by the fact that I am blessed to be a part of something bigger.  I am an American, and living the American dream. 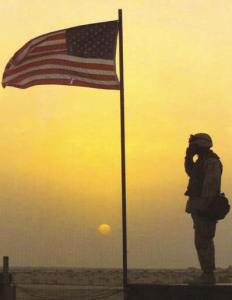 As I reflect on the meaning of Memorial Day I think about being a part of something bigger, being a part of the American dream; one that has been provided and protected by those that have served our country and made the ultimate sacrifice to protect the dreams of every little gal just like me.

On Memorial Day I will watch as my son marches with his high school band (trumpet) in the local parade arriving in our central park at the Veterans Memorial.   Over three thousand people will cram the streets of our tiny little community to honor the memories of those that have fallen and those that currently serve.  It is one of my favorite days of the year.  For an hour the world just seems right, everyone in that park will sing the national anthem and recite the pledge.  I am not alone in wanting to celebrate being a part of something bigger.

This year the best way I could think to honor those that serve was to partner with a charity that helps those returning from active duty and need help to find a job.  It is a small way to give back to something bigger than the role we play as Career Agents.  Please join us in spreading the word about Hire Heroes USA.

Charlotte A. Byndas started her career in the search industry in 1993 just as the industry was embracing the technology revolution that would change the very DNA of executive recruiting. In 1994 she lead efforts to automate one of the most successful franchise offices of Management Recruiters International, building their first contact management system and website. Over the next few years she successfully launched and managed several new recruiting companies servicing the IT, manufacturing, healthcare, IT, accounting, insurance, engineering, sales, and non-profit industries. In 2002 she turned her efforts toward helping individuals launch and build independently owned recruiting companies helping to close over $30 million system wide, earning her countless testimonials labeling her “recruiting ninja” and “recruiting “guru”. Launching Search Entrepreneurs Inc, and TheITRecruiters she helped develop the first anti-franchise model in the recruiting industry as well as an innovative "candidate first" approach to IT recruiting.